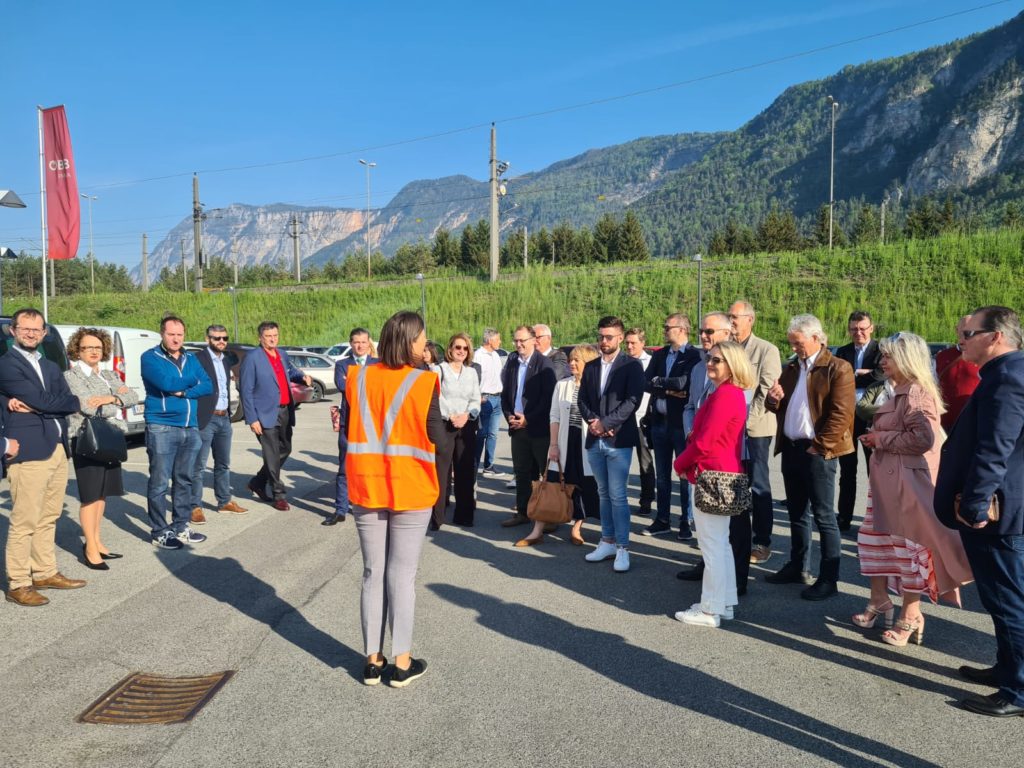 Fürnitz, May 13, 2022. The ports of the northern Adriatic represent an important traffic junction for intercontinental, maritime long-distance but also short and medium-distance connections from the Mediterranean region to China and are indispensable for Carinthia’s export economy.

In order to strengthen economic relations with the northern Adriatic ports of Koper and Trieste, the Carinthian Chamber of Commerce organized a network trip with around 50 Carinthian business people on May 12 and 12, 2022, as well as a fact-finding mission to precisely these ports. The delegation was led by Chamber of Commerce President Jürgen Mandl and Chamber Director Meinrad Höfferer. Illustrious guests such as Elisabeth Ellison-Kramer, Austrian Ambassador to Slovenia and First President of the Carinthian Parliament, Reinhart Rohr, accompanied the delegation.

The extensive program, which revolved around logistics, started with a visit and presentation of the logistics hub Fürnitz, the southernmost logistics location in Austria. The management of the 160-hectare hub and dry port LCA Logistik Center Austria Süd GmbH, Julia Feinig-Freunschlag and Udo Tarmann, presented the location and presented an outline of the development of the location: Founded in 2017, the location listed around 40 local companies. Today, the managing directors are satisfied with the current figures: 53 local companies with around 890 employees. Further settlements are in preparation and will round off the offer at the location. In addition to the settlement of a production facility with around 150 employees, this includes a motel, charging stations for electric cars, offices and a logistics center geared towards supplying old people’s and nursing homes. The planned expansion of the hub and the modernization of the ÖBB terminal were also discussed and met with great interest.

After a hearty breakfast we continued to the port of Koper. Here, the Carinthian delegation was able to visit the rapidly growing port, which is already an important partner for Carinthian companies, and then held talks with the business delegate for Slovenia, Wilhelm Nest, a native of Carinthia in Ljubljana. In the evening, the delegation members were invited by the Austrian Ambassador to Slovenia, Elisabeth Ellison-Kramer, to attend the opening of the Austrian Honorary Consulate in Koper with Honorary Consul Urška Svetlik.

Today the delegation continues to the port of Trieste, in northern Italy, where the delegation will be received by Gudrun Hager, business delegate for Italy.

After an exciting visit to the port, this exciting and informative trip ends with a visit to the Area Science Park in Padriciano (Trieste). In Trieste, the interdisciplinary scientific research center Area Science Park is one of the most important development centers in Italy. The 84 institutes with 1,600 employees are very specialized in research in the fields of biomedicine, physics, energy, environment, industrial innovations, circular economy and nanotechnology. A meeting with Sabrina Strolego (Austrian Honorary Consul in Trieste) is also planned as part of the visit to the research park. With her, the economic relations between the two regions of Carinthia and Friuli-Venezia Giulia should be reflected and approaches for further, successful cross-border cooperation should be discussed.