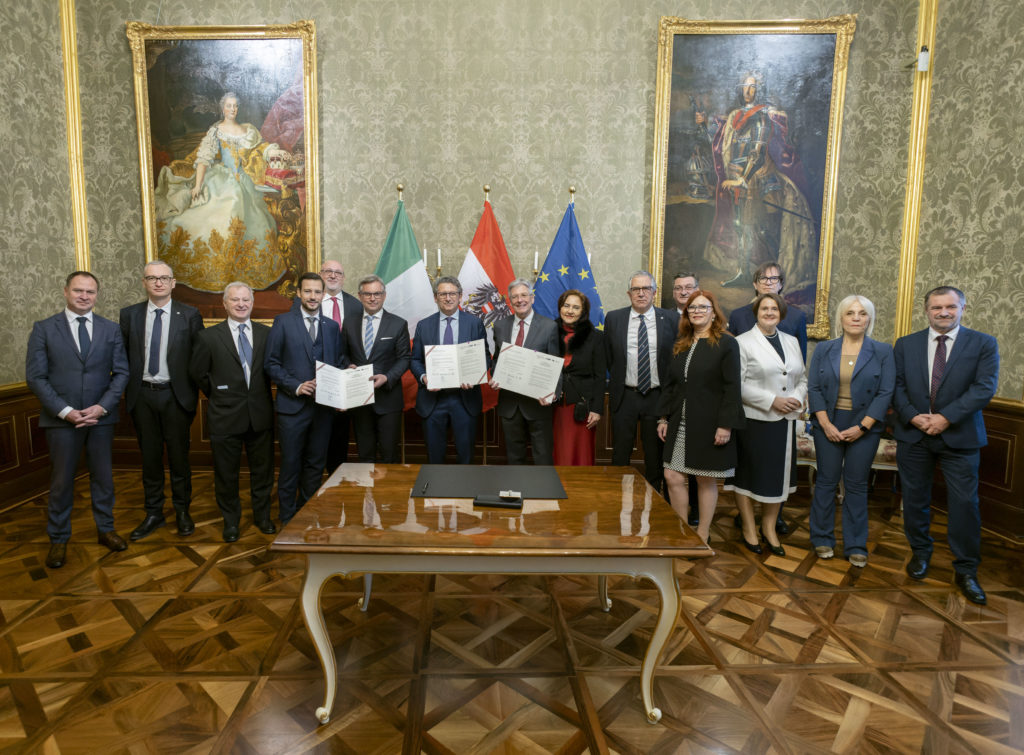 The first and only cross-border rail customs corridor in the history of Europe was officially agreed between Austria and Italy. From 2023, more and more containers arriving in Trieste are to be loaded directly from the ship onto the train and cleared through customs on the way to Villach/Fürnitz. Faster processing in the port makes it more competitive.

Fürnitz, December 1st, 2022. An EU-wide first and so far only rail customs corridor between the port of Trieste and the Logistics Center Austria Süd (LCA-Süd) in Villach/Fürnitz will start pilot operations at the beginning of next year. The containers arriving at the port of Trieste can then be loaded directly from the ship onto the freight train and set off northwards, to Villach-Fürnitz, without any customs procedures. After the goods have arrived in Austria, customs clearance is carried out. What does this mean for the two participating countries? A major advantage is that the goods are transported faster and with less customs administrative effort, thus enabling an increase in traffic shifts between ship and the much more climate-friendly rail. Sustainability, company settlements and important jobs should go hand in hand with the introduction of the new customs and rail product. The security checks and the obligatory health checks, as before, will be carried out in the port of Trieste. Regular operation is scheduled to start in the course of 2023.

On December 1, the signing of the contract took place in Vienna in Prince Eugen’s Winter Palace as part of a festive ceremony with the project partners, including Finance Minister Magnus Brunner, ÖBB Board Member Andreas Matthä and Port Manager Zeno D’Agostino, high-ranking representatives of the Austrian and Italian customs authorities, all First of all Bettina Vogl-Lang and Heike Fetka-Blüthner, Governor Peter Kaiser, Provincial Councilor Sebastian Schuschnig and Chamber of Commerce President Jürgen Mandl as well as the Italian Ambassador to Austria Stefano Beltrame.

For Finance Minister Magnus Brunner, the rail customs corridor is an absolute flagship project in the logistics and customs area that is unparalleled in the EU: “It strengthens Austria as a business location and our position as a landlocked country. In the next step, the shipments that are cleared through us for customs purposes are not only sent domestically, but to the whole of Europe. Austria can thus position itself as a logistics hub and focal point for the movement of goods throughout Europe.”

For the governor of Carinthia, Peter Kaiser, it is clear: “With today’s signing for a customs corridor between the port of Trieste and the logistics center Villach, we – writes Carinthia – are once again making history. Today, in the truest sense of the word, we are setting the course for the realization of the first customs corridor in Europe. Carinthia will thus move even closer together with its partner region Friuli, which already cooperates frequently. We are thus creating another internationally brightly shining beacon that will bring many jobs, business settlements, enable new economic cooperation and create prosperity.”

Regional Economics and Logistics Minister Sebastian Schuschnig sees the historic implementation of the customs corridor as an economic milestone for Carinthia as a business location: “A European flagship project is being implemented in Carinthia, with which we are setting the course for Carinthia in the heart of the Alps-Adriatic region as an EU – position wide economic hub. Carinthia lies at the intersection of two European traffic axes, with the direct and unbureaucratic connection of the Logistik Center Austria Süd in Villach/Fürnitz to the port in Trieste, the entire economic area has a unique selling point in Europe. Together with the Koralmbahn, another project of the century for the location, Carinthia is becoming highly attractive for company settlements and is given completely new economic opportunities to create added value and jobs in the region”.

“It’s an important step for us. With the first European international customs corridor between two countries, we are accelerating both import and export procedures to an important railway junction for Trieste, but also for Austria and for all of Central and Eastern Europe. This will allow for a significant reduction in administrative and bureaucratic steps, thereby reducing both container handling times and the cost of transporting goods to and from our port of call to, or from worldwide to, world markets. With the effect of improving our international competitiveness,” Zeno D’Agostino comments on the historic moment.

ÖBB CEO Andreas Matthä confirms that Trieste is an important hub for ÖBB for freight traffic to and from Austria and in the European hinterland. “With our freight transport subsidiary ÖBB Rail Cargo Group, we are one of the leading logistics companies at the port of Trieste. I am pleased that we are now intensifying our cooperation and working together on an innovative and efficient solution for the economy of Carinthia and for climate protection. With joint services, we want to get the increasing volumes of goods arriving in Trieste by ship faster and more efficiently on the rails and redistribute them in the future.”

For the two managing directors of LCA Logistik Center Austria Süd GmbH, Julia Feinig-Freunschlag and Udo Tarmann, the festive act means the “honorable conclusion of many years of intensive, cross-border development work, which began in 2017 with the EU project Smartlogi and is also the starting signal for the implementation of the new customs and rail product on the market. Together with the ÖBB, we now want to draw the attention of the economy, especially the Carinthian shippers, to the advantageous use of the customs corridor and continue to make an important contribution to shifting freight traffic from road to rail.”

The rail customs corridor was developed by the port of Trieste, ÖBB, the future storage facility operators Adriafer and Rail Cargo Austria together with the logistics competence agency LCA Logistik Center Austria Süd GmbH and the customs administrations from Italy and Austria.

Carinthia’s competence agency for logistics and mobility supports the settlement of international, logistics-related companies and strategically accompanies them in their development at the logistics hub Fürnitz. With comprehensive services and advisory services, the targeted promotion and development of the more than 160 hectare location in the border triangle of Austria, Italy and Slovenia and beyond that of the entire logistics location of Carinthia. At the intersection of the West-Balkan corridor and the Baltic-Adriatic axis, ÖBB operates Austria’s second-largest large marshalling yard at the logistics hub Villach Süd-Fürnitz, which serves as a hub for national and international freight traffic, as well as a freight terminal operated by Terminal Service Austria ( TSA).