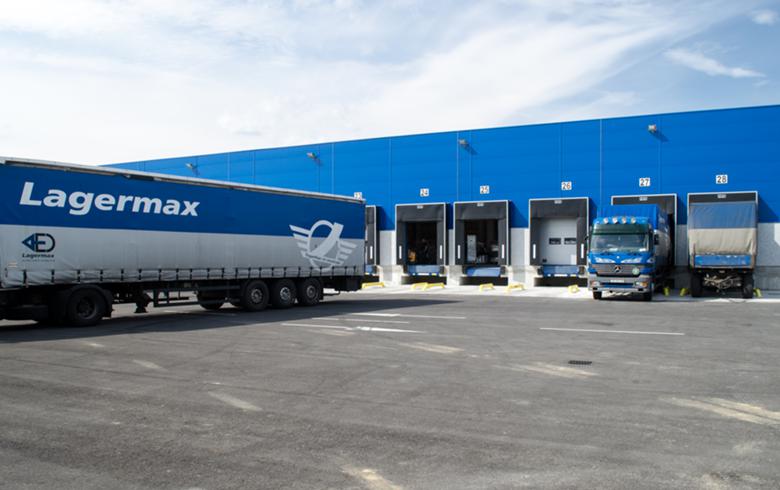 Lagermax Internationale Spedition GmbH, one of the major Austrian Logistics service providers, is expanding its logistics activities in Carinthia by establishing the new branch at LCA-South, after the Villach branch has reached full capacity. With the start-up of the newest branch, the Salzburg headquarters transport and logistics company, nowadays present in 9 countries, is expanding its network in Austria by adding another location to their existing six branches.
Due to the newly acquired capacities in Fürnitz, Lagermax is optimizing its handling and delivery times. A total of 5,800 m² of storage space and 6,500 m² of open space are being developed. The offices amount to approximately 415 m².
The locations Villach and Fürnitz (LCA-South) serve as an international forwarding and distribution hub for international traffic flows,  and are fully integrated into the Lagermax network. Direct connections to the Balkan regions and Italy allow customers from Carinthia as well as international partners a variety of options in general cargo and LTL. The offer in the field of value-added services has been expanded and distribution services strengthened, the company announced in a press release.
The Lagermax Spedition promises its customersa  maximum operational time of 24 hours within Austria, and additionally, by cooperating with the Lagermax subsidiary ‘Timesped Graz’, a reliable and secure delivery of the shipments. Specific products and express deliveries as well as two-man deliveries are just as much a part of the product portfolio as special services in the area of delivery and construction of refrigerated components.
Since 2010, Lagermax Spedition has been active  in Carinthia as a transport and logistics provider. In Villach, the company maintains its own terminal on a 15,000 m² site with 7,500 m² of storage space for individual transport and logistics solutions, and acts as a hub for transports to / from Italy, Slovenia and Croatia.

Find out more or adjust your settings.

This website uses cookies so that we can provide you with the best user experience possible. Cookie information is stored in your browser and performs functions such as recognising you when you return to our website and helping our team to understand which sections of the website you find most interesting and useful.

Strictly Necessary Cookie should be enabled at all times so that we can save your preferences for cookie settings.

If you disable this cookie, we will not be able to save your preferences. This means that every time you visit this website you will need to enable or disable cookies again.